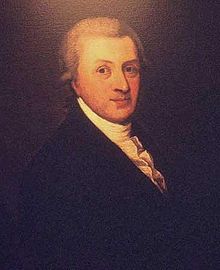 Arthur Guinness (1725-1803) only attended the initial meeting. He died before the hospital opened. The accepted wisdom is that his father, Richard, was the estate agent and steward for Dr Arthur Price, Rector of Celbridge and later Bishop of Clonfert. It is believed that he was named after Dr. Price. Both he and his father received a bequest in Dr. Price’s will and this bequest is assumed to have funded his initial business ventures.

In turn he himself was a generous contributor to the Church of Ireland.  He began his family’s long association with St. Patricks Cathedral by advancing the Dean, 250 guineas to cover the cost of alterations and repairs to the chapel schools. In 1786 he and Samuel Bewley founded the first non denominational Sunday school. This school became the Dublin Free School in 1798 and was still active in 1830.He was also treasurer of the Meath Hospital. His views on philanthropy were described as those of a tolerant and committed Anglican.

It was, however, his son who was to play the most significant family role in the hospital’s history.

He is buried in a small graveyard in  Oughterard, Co. Kildare